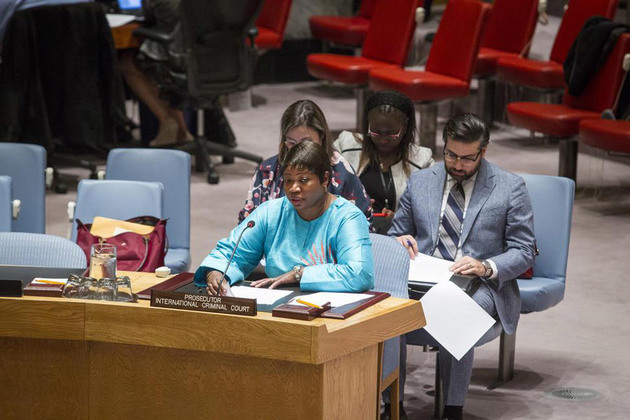 12 December 2014 - The Security Council must rethink its approach to the deteriorating crisis in Darfur and fully pursue those individuals deemed responsible for atrocities, the Prosecutor of the International Criminal Court (ICC) told the body today as she firmly criticized its lack of action on crimes committed in the war-torn region.

"It is becoming increasingly difficult for me to appear before you and purport to be updating you when all I am doing is repeating the same things I have said over and over again, most of which are well known to this Council," Fatou Bensouda lamented in her statement this morning. "To date, none of these individuals have been brought to justice, and some of them continue to be implicated in atrocities committed against innocent civilians."

Ms. Bensouda"s briefing to the Council comes amid a worsening security climate and dire humanitarian crisis in the Sudanese region with ramped-up hostilities between Government forces and armed movements, deadly inter-communal conflicts and a precipitous rise in criminality and banditry.

Moreover, according to UN estimates, the number of people displaced by conflict has increased to more than 430,000 since the beginning of the year, with close to 300,000 remaining displaced in addition to the more than two million long-term internally displaced persons, or IDPs.

However, the ICC Prosecutor added, not only was the situation in Darfur "deteriorating," but the brutality with which crimes are being committed there has become "more pronounced." In particular, she warned that women and girls were continuing to bear the "brunt of sustained attacks" on innocent civilians.

Fresh allegations of a mass rape of 200 women in Tabit, located in North Darfur, for instance, have fuelled concerns regarding the overall security situation in the region and the general safety of women and girls in the area. The UN-African Union hybrid mission (UNAMID) recently declared it had initiated an investigation but said its team had found no evidence confirming the claims and received no information regarding the purported acts. Village community leaders, meanwhile, reiterated to UNAMID that they "coexist peacefully" with local military authorities.

Nonetheless, Ms. Bensouda observed that UNAMID had been denied full access to Tabit, "thus frustrating full and transparent investigations" and argued that it was "unacceptable" that such investigations were conducted in a situation in which perpetrators maintained effective control over their victims.

"Victims of rape are asking themselves how many more women should be brutally attacked for this Council to appreciate the magnitude of their plight," she continued. "We find ourselves in a stalemate that can only embolden perpetrators to continue their brutality."

Ms. Bensouda, in fact, pointed out that ICC Judges had already concluded that certain individuals in Sudan be brought to the International Criminal Court to answer charges, including Sudanese President Omar A1 Bashir, for whom a warrant of arrest has been issued. However, until the Council applied "a dramatic shift" to its approach to arresting Darfur suspects, it would be increasingly difficult for her and the ICC to continue doing their work, she concluded.

"Given this Council"s lack of foresight on what should happen in Darfur, I am left with no choice but to hibernate investigative activities in Darfur as I shift resources to other urgent cases, especially those in which trial is approaching. It should thus be clear to this Council that unless there is a change of attitude and approach to Darfur in the near future, there shall continue to be little or nothing to report to you for the foreseeable future."