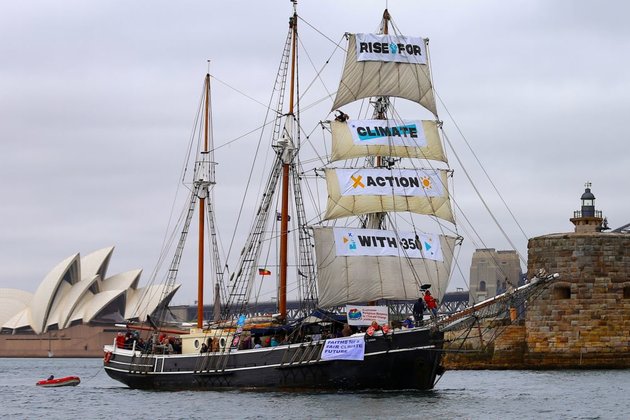 SYDNEY - Tall ships carrying climate change banners have sailed into Sydney Harbor in Australia, launching a wave of protests across 95 countries. The protests have been organized by the New York-based lobby group 350.org.

The message from conservationists on Sydney Harbor has echoed in towns and cities around the world, as campaigners call for an end to the use of fossil fuels. Australia remains heavily reliant on coal to generate its electricity, but activists say it must join a concerted international push toward renewable energy. The government in Canberra, however, has scrapped a national power plan that would have reduced emissions and boosted the clean energy sector, and some lawmakers want Australia to abandon the Paris climate accord because of its impact on the fossil fuel industry.

This week Australia and New Zealand joined Pacific nations to declare that climate change was the 'single greatest threat' to island states in the region.

"In the south, we are getting some very severe droughts [that] are beginning to impact some of the islands, and so all of this is happening. The erosion and the need to continue to protect the coastline will continue to be a threat to our people," he said.

Australia is being urged by its Pacific neighbors to do more to reduce its greenhouse gas emissions, which are some of the highest per capita in the world.

But Australian Foreign Minister Marise Payne says Canberra is committed to helping the region adapt to the effects of warmer temperatures.

"In the last couple of years, we have committed over AUD$300m ($213 million ), AUD$200m ($142 million) of which has already been expended on work focused on adaptation and on resilience, and certainly that was a significant part of the discussion this week," she said.

Environmental rallies held in almost 100 countries have come as the U.S. state of California prepares to host the Global Climate Action Summit next week. The summit will bring together political and business leaders, as well as celebrities to urge governments to do much more to tackle climate change.