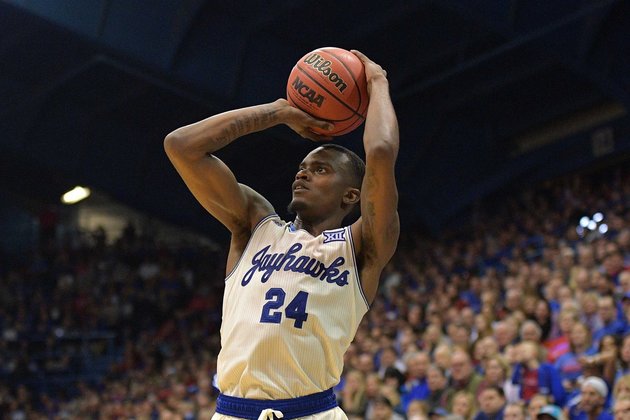 Attention at Kansas has been placed squarely on Lagerald Vick after the senior guard set career bests with 30-plus points in each of the last two games.

That does not mean, however, that the No. 2 Jayhawks are not aware of an uneven start by junior forward Dedric Lawson, a Memphis transfer with credentials that made him a preseason All-America selection.

Lawson was coming off a scoreless game against Vermont when an unusual basket got him jump-started. Seated under a basket in Allen Fieldhouse, Lawson retrieved a rebound and then made a follow shot to snap his scoring drought.

"I thought I got fouled when I got (the ball),'' Lawson said. "I really thought they blew the whistle and I just shot it back up.''

The unorthodox bucket was part of a 19-point performance Lawson managed Friday against Louisiana, while going 6-for-11 from the field.

He also scored 20 points for the Jayhawks (3-0) in their season-opening win over Michigan State and now will attempt to factor into his team's bid to capture the Preseason NIT. Kansas opens that event Wednesday against Marquette (3-1) in Brooklyn, N.Y.

Lawson is shooting just 31.4 percent, though he averages 9 rebounds to lead the Jayhawks.

"It is hard to get a lot of confidence by making a shot when you are sitting down and he obviously did that,'' Kansas coach Bill Self said. "But I am not worried about Dedric in scoring or anything like that. I just want him to be more aggressive and play probably a little bit more to his athletic ability.''

No. 5 Tennessee faces Louisville in the other Preseason NIT matchup on Wednesday. The final round of the four-team tournament is scheduled Friday.

"Playing Marquette and then either Louisville or Tennessee in a three-day window, that will tell us a lot more about who we are,'' Self said.

A preseason choice to place second in the Big East, Marquette is led by junior guard Markus Howard, who leads the Golden Eagles in scoring (20.0) and assists (5.4). Collectively, Marquette crashes the boards. Its rebounding margin of plus-8.7 is led by brothers Sam and Joey Hauser, who average 6.5 rebounds apiece.

Marquette's lone defeat was convincing, a 96-73 loss to Indiana, so the challenge Kansas presents is formidable. Especially when the Jayhawks are making 46.9 percent of their 3-point attempts and can balance that threat with 7-foot sophomore center Udoka Azubuike, who averages 19 points on 67.6 percent accuracy inside.

"They're very efficient when they get it deep, but they're at their best when they're hitting 3s,'' said fifth-year Marquette coach Steve Wojciechowski. "Vick had a game where he was 8-for-8 from the 3-point line (against Vermont). Scary.''

Guard Joseph Chartouny, a graduate transfer from Fordham, scored 13 of his 16 points in the second half in Marquette's win Saturday over Presbyterian. Before that outburst, Chartouny had only scored four points in three games, all on free throws.

"He's a really celebral player. He's really intelligent on the court,'' said Howard, crediting Chartouny for his ability to distribute the ball while the Golden Eagles cope with an unseemly 15.5 average for turnovers.