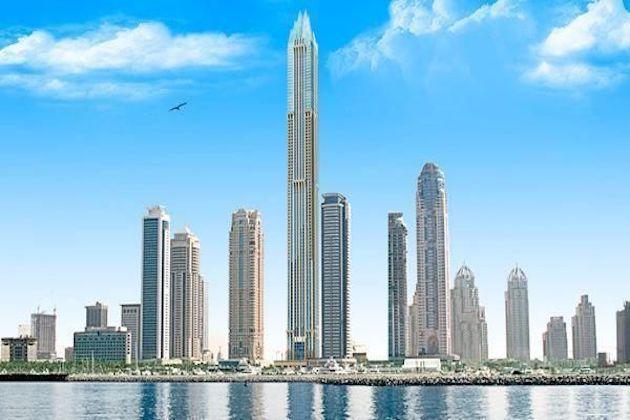 DUBAI, UAE - What was once billed as the world's highest residential tower has gone bust, leaving banks, and investors scrambling to protect their investments.

Caught up in the financial meltdown, aside from a number of banks, are major players such as the multi-billion-dollar Abu Dhabu Financial Group and Hard Rock Hotels.

The $315 million Marina 101 tower, with the name reflecting the height of the 101-storey apartment and tower complex, is actually complete from a construction perspective, but is awaiting the completion of services and fit-out. Construction on what is currently the tallest building in the prestigious Dubai Marina, the world's largest man-made marina, and the second highest building in Dubai after the Burj Khalifa, began in 2007.

As with most new residential development in Dubai, off-plan sales have sucked in investors from all over the world. To boost sales in 2014, the developer Sheffield Holdings Limited, roped in the Abu Dhabi Financial Group to acquire a number of units in the first 33 floors of the tower, and appointed the Hard Rock Hotels group to operate the first UAE-based 5 star Hard Rock Hotel within the building. The developer sold off more apartments on the news, promising investors 70% of the revenue from their apartments which would be in a hotel pool. Of the 470 apartments in the pool, all were sold off to investors. It is unclear as to what percentage was picked up by Abu Dhabi Financial Group.

With the project stalled and no doubt holding costs mounting, the project will now have to be completed by the three banks that have underwritten the development.

The Dubai daily Gulf News, which broke the story with an article by its chief reporter Ashley Hammond on Thursday, said it had spoken to the project's lead lender Bank of Baroda, who together with Indian Overseas Bank and Bank of India said the banks were out-of-pocket by $95.28 million, which according to an offer to sell the debt of the three banks, had risen to $116.44 million by May this year.

"We are embarking with developers working to find a resolution to complete this project to ensure all investors and banks get back what they paid," Bank of Baroda CEO of GCC Operations Ananda Kumar told Gulf News.

"How long that will take, we may not be able to tell exactly, but we are expecting that within 6 months, this entire thing should be over."

"The building is 97% complete and the market appears to be good keeping in view locality," he said.

Asked by Gulf News how investors would fare in the takeover by a new developer the official responded, "We are analysing various options to protect individual buyers' as well as the banks' interest."

"We are committed to getting this done in the quickest time possible, but there are court processes ongoing out of our jurisdiction that we have to respect."

One issue clouding the proceedings is that it would appear a large number of apartments sold off-plan were not registered with Oqoods, an interim owner registration mechanism, which is issued prior to or during construction, in advance of the issuance of a title deed on completion. A number of 'owners' also invested through a third party in a type of funding mechanism.

Asked what would happen to those without Oqoods and who had paid out of escrow, Ananda Kumar, CEO of Bank of Baroda, told Gulf News, "It's difficult to say. If there's no registered agreement, it's not recognised and nothing is there to be taken as lawful. They may not have any right or money back."

"If the Oqood is duly registered they should be given justice, however, and we want justice for all buyers who have booked."

It would appear from the Gulf News article a number of investors have paid 80% or 90% of the cost of the apartments up front, which begs the question as to why the tower has not been completed - given that some Dubai developers have announced margins on property developments of up to 50%.

Hashim Husseini, a Canadian of Iraqi origin, told the newspaper he purchased three one-bedroom apartments in 2013 paying 90% of the total cost up front.

"The handover was expected in 2015," he said. "I waited until then but there was no progress, then in 2017 I enquired and found out that all three one-bedroom apartments had been changed into studios."

"I don't mind the delay, my issue is that the floor plan stated one-bedroom and this is now a studio," he said.

"The bedroom windows for all three apartments were also meant to be sea-facing but then an external elevator was built that wasn't in the original plan sold to me that blocks the view in all three flats," Husseini added.

Sheffield Holding Limited's website has a message saying it is being updated and will be back soon.

In September 2014 the group announced it was negotiating to acquire two new sites in Business Bay, Dubai, for the development of two more towers, with a combined value of $326 million.

The Dubai property market has been in free-fall since 2014 with prices and rents having halved in that period. Despite the downturn, sales of off-plan units have skyrocketed with buyers being enticed by back-end finance plans, waiver of the 4% Dubai Land levy and free service charges for up to 10 years.