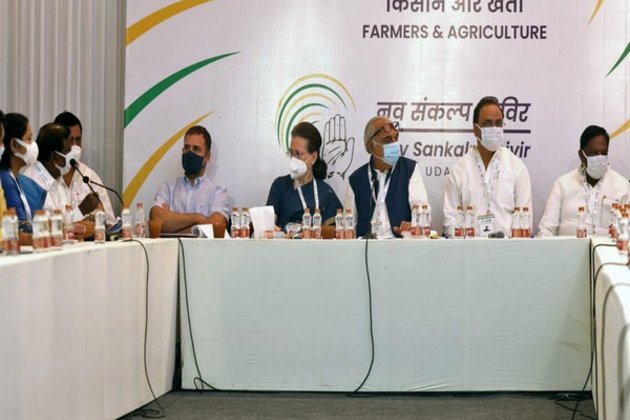 New Delhi [India], May 17 (ANI): After the Congress Youth Committee headed by the Punjab Congress president and former Youth Congress chief Amarinder Singh Raja Brar recommended 65 years as the retirement age for party leaders, sources said that the Congress Working Committee (CWC) has decided that this will be implemented in the party after 2024 Lok Sabha elections.

The youth committee had recommended the Congressmen to retire at 65 years, to which the party's interim president Sonia Gandhi also agreed, but got a deferment for two years.

The Chintan Shivir was organized in Udaipur after a gap of nine years. It was attended by around 430 Congress leaders and the party had prepared a "six draft resolution" submitted to Sonia Gandhi by the six conveners appointed for six committees formed to discuss different subjects from politics to the organization, farmers-agriculture, youth-related issues, social justice, and welfare and economy.

After the resolutions were passed by the CWC at Chintan Shivir, the party was seen making a path for young leadership by announcing reservations for leaders under the age of 50 years. At the same time, the senior leaders were also given a grace period till the 2024 elections.

For the discussion at Shivir, the party president had formed six different committees, whose recommendations were approved in the camp. Many big decisions were taken, but one decision was postponed.

The party president Sonia Gandhi also agreed to the recommendation of the 65-year age limit. After which there was an uproar.

Bhupinder Singh Hooda in Haryana, Kamal Nath and Digvijay Singh in Madhya Pradesh, and Pratibha Virbhadra Singh in Himachal all are above 65 years. Apart from this, other senior leaders like Ashok Gehlot, P. Chidambaram, Ghulam Nabi Azad, Anand Sharma, Mallikarjun Kharge, and Pawan Bansal come under this limit. Even Sonia Gandhi herself falls into this criteria.

After a long discussion about the retirement age of Congress leaders, it was concluded that at present it would be a bad idea to take such a decision in hurry, during the bad phase of the party, as it would not be the right decision to make all the big leaders, who have taken command in their respective states, sit at home immediately.

By the end, it was decided for the time being that instead of implementing this matter immediately, it should be postponed till the 2024 Lok Sabha elections, after that, this decision will be gradually implemented gradually.

With this, the senior leaders have got a cooling-off period of two years.

At the meeting, it was decided to give 50 per cent of the available posts in the organization to the youth, under the age of 50, and all the senior leaders seemingly agreed to it. (ANI)