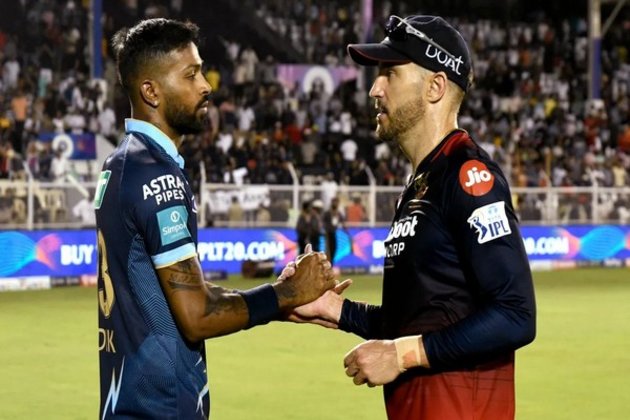 Mumbai (Maharashtra) [India], May 19 (ANI): Gujarat Titans were at 72/3 after ten overs in their match against RCB as the Banglore bowlers kept a check on flow of runs through tight bowling.

Josh Hazlewood gave a big blow to GT as he dismissed star batter Shubman Gill when he was barely scored a run. Glenn Maxwell gave another blow as he removed Matthew Wade with GT at 38. GT lost the third wicket at 62 as Wriddhiman Saha was sent to the pavilion.

Earlier, Gujarat Titans skipper Hardik Pandya won the toss and opted to bat against Royal Challengers Bangalore in the match being played at Wankhede Stadium in Mumbai.

The Titans were the first side to qualify for the playoffs this season. For Royal Challengers this is a must-win match to keep alive their chances of making it to the playoffs.

Newcomers GT have had a dream start in the maiden IPL season and are on the top spot with 20 points from 13 games.

Speaking after the toss Gujarat Titans skipper Hardik Pandya said: "We are going to bat. The kind of situation we are in, we thought we can practice batting first and putting a good score on the board. One change, Lockie comes in place of Alzarri. Looks like a similar wicket to the one we played against Chennai, but I expect this to play better as this is an evening game."Speaking after the toss Royal Challengers Bangalore skipper Faf du Plessis said: "We would have batted too. Looks a bit dry. One change. Sid Kaul comes in for Siraj. We have to win today and Delhi need to lose their game. Games like today brings out characters." (ANI)