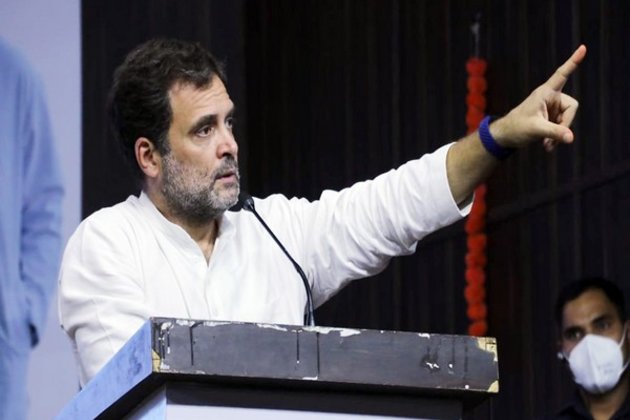 New Delhi [India], May 20 (ANI): Congress leader Rahul Gandhi on Friday urged party workers and leaders to extend all possible assistance to people who are affected by severe flooding in Assam.

"Lakhs of people are affected by severe flooding in Assam. I urge Congress workers and leaders to continue extending all possible assistance to the rescue and relief operations," he said in a tweet.

"Till now, 7,17,046 people across 29 districts have been affected due to the flood situation in the state. Nine people have died in floods and landslides so far," Assam State Disaster Management Authority said on Thursday.

Assam State Disaster Management Authority said that at present 1413 villages are underwater and Nagaon is the most affected district where 2.88 lakh people are reeling under the calamity. In Cachar nearly 1.2 lakh people and in Hojai more than 1.07 lakh people were affected, it said.

A portion of the Kampur-Kathiatali connecting road in the Nagaon district got washed away in floods. Several parts of the state are reeling under flood.

Assam Rifles, National Disaster Response Force and the Indian Army are carrying out rescue and relief operations in flood-hit areas of the state.

Further, Assam Cabinet decided to introduce an emergency flight service between Silchar and Guwahati at the rate of Rs 3000, to mitigate the communication crisis due to floods and landslides in Dima Hasao and Barak Valley.

In view of the flood situation, the Cachar district administration has closed all educational institutions (government and private) and non-essential private establishments for 48 hours (May 19th and 20th) in the district.

In view of the damages to railway tracks in multiple locations, the Northeast Frontier Railway (NFR) has already suspended all trains through Lumding-Badarpur Hill Section to Barak Valley, Tripura, Mizoram and Manipur, and restoration work is on in the damaged areas. (ANI)