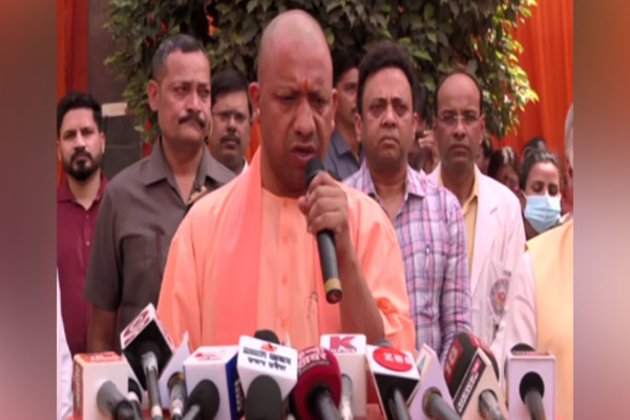 Lucknow (Uttar Pradesh) [India], June 23 (ANI): On the occasion of the death anniversary of Dr Syama Prasad Moookerjee on Thursday, Uttar Pradesh chief minister Yogi Adityanath paid floral tributes to him on the behalf of UP administration and the population.

Addressing the media persons, the UP CM said, "for ensuring India's unity, Dr Mookerjee raised his strong voice against the appeasement policy of the Congress government. He clearly said that two leaders, two legislation, and two symbols ("ek desh mein do pradhan, do vidhan, aur do nishan") cannot run a country, and for that, he sacrificed his own life.""His sacrifices are the witness that it was Congress' intriguant that developed the feelings of separatism and terrorism in Kashmir and India; following which they imposed section 377 on Kashmir, while they also made attempts to impose such illegitimate laws in the country," he added.

Speaking about Mookerjee's sacrifice in the freedom movement on his 69th death anniversary, the CM added, "the news of his death in Kashmir valley-- on this day in 1953-- came as a disheartening shock to the entire country."Later in the address, he lauded Prime Minister Narendra Modi's leadership for the movement that helped Kashmir move towards the country's development.

"Under the leadership of PM Modi, Kashmir is free of section 377 today and is seen moving forward with strength towards the development of the country," he said.

"The abrogation of section 377 has been a part of an important campaign that was intended to enhance development in Kashmir and make the country free of every kind of separatism and terrorism," he added.

He said that Mukherjee was a great freedom fighter, social activist, political critic and a great son of Bharat Mata, who always believed in the country's unity.

Meanwhile, Prime Minister Narendra Modi also remembered Mookerjee on his death anniversary and said that every Indian is indebted to him for his unparalleled efforts towards furthering India's unity.

PM Modi said that Mookerjee worked hard for India's progress and dreamt of a strong and prosperous nation.

Union Home Minister Amit Shah also paid tributes to Syama Prasad Mookerjee on his death anniversary and said that every Indian is indebted for his supreme sacrifice in the struggle to protect Bengal and to keep Kashmir an integral part of India.

In a series of tweets, Shah paying tributes to him said, "Dr Shyama Prasad Mookerjee's life was a wonderful amalgamation of new ideas of national unity, cultural dedication, education and development. Every Indian is indebted for his supreme sacrifice for the struggle to protect Bengal and to keep Kashmir an integral part of India."Syama Prasad Mookerjee was the founder of Bharatiya Jana Sangh and also served as the Minister for Industry and Supply in Prime Minister Jawaharlal Nehru's cabinet.

Bharatiya Jana Sangh, founded in 1951, is the ideological parent organisation of the Bharatiya Janata Party (BJP).

According to the BJP's official website, on the issue of the Delhi pact with Likayat Ali Khan, Mookerjee resigned from the Cabinet on April 6, 1950. Later on October 21, 1951, Mookerjee founded Bharatiya Jana Sangh in Delhi and became its first President.