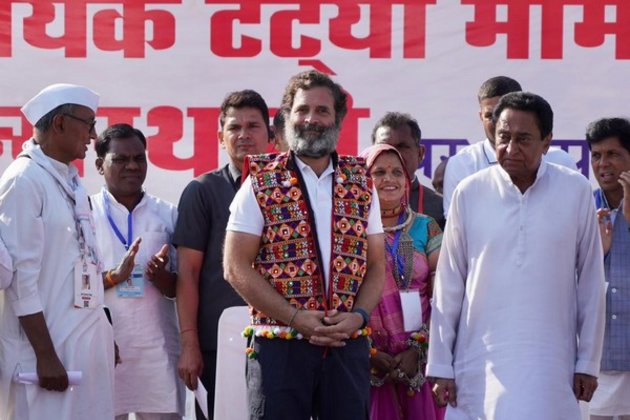 Madhya Pradesh [India], November 24 (ANI): Asking BJP to apologize to tribals for using the word "vanvasi" (forest dweller) which is a derogatory term to describe them, Congress leader Rahul Gandhi on Thursday said that the Bharatiya Janata Party (BJP) plans to finish them off by denying their rights.

'The Congress identifies tribal people as 'Adivasi', which means the original inhabitants of the land and thus the true owners of India but under the BJP's rule maximum atrocities are being carried out on the tribals of the state," Gandhi said at the tribal convention held as part of Bharat Jodo Yatra at the birthplace of tribal hero Tantya Bhil in Khandwa district of Madhya Pradesh.

He called on the BJP to apologise to the tribals for insulting them by calling them 'Vanvasis' and promised that when the Congress came back to power, it will restore all the rights to the tribal people.

Rahul Gandhi mentioned the freedom fighter stating, "Tantya Mama for me is an inspiration, thought and an ideologue".

"In MP, most of the atrocities would have been on tribal. Adivasi means first in India. When no one lived in this country then Adivasi used to live here. Tribal is the real owner of this country. They have the first right to land, water and forest. Their children should get rights. If their child wants to become an engineer or doctor, the government should help them," the Congress leader added."Thinking about Tantya Mama's name, the first word that comes to mind is revolutionary fearless. But when Tantya Mama was hanged by the British, the RSS was helping the British government," Gandhi alleged.