CBFC granted certificate to Adipurush, we have every right to show it in cinema halls: Makers argue in court 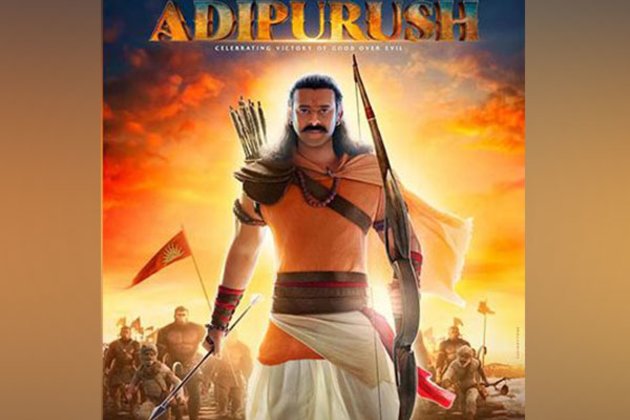 New Delhi [India], November 25 (ANI): Censor Board for Film Certificate's (CBFC) certificate has been granted to the movie Adipurush. The suit against the movie filed before the court is not maintainable. The makers of the Adipurush argued before a Delhi Court on Thursday.

"We have every right to show it in cinema halls," said makers of Adipurush argued before a Delhi Court.

A plea seeking stay on the release of Prabhas, Saif Ali Khan, and Kriti Sanon starrer movie Adipurush has been moved in the court.

While listing the matter on December 17, the court asked the petitioner that when a public authority like CBFC has granted a certificate to the movie for screening, can a person approach this court?Additional senior civil judge Abhishek Kumar put the question to the petitioner's lawyer Raj Gaurav, "Once a CBFC certificate has already been granted to the movie without objection, can you approach this court with a suit like the present one?"The court also said that the Supreme court judgment relied on the counsel of the defendant shows the view of the court in relation to the Right to freedom of speech and expression along with artistic liberty.

In the last hearing, the Court had allowed Bhushan Kumar, the producer of the upcoming film Adipurush to argue at pre-summoning stage on the maintainability of a plea-seeking stay on the release of the film.

During the argument on Thursday, the Senior advocate appeared on behalf of the filmmaker and argued that the CBFC certificate was granted to the film in September 2022 after the examination of the content by the examining committee of the Board and therefore the makers have every right to show it to the public in the cinema hall. Unless it is withdrawn by the superior authority.

Senior advocate Sanjeev Sindhwani also argued that there is no personal injury to the plaintiff. The injury must be personal to the plaintiff, not in general. In this situation, the suit is not maintainable.

The petitioner has leveled only allegations in general, the senior counsel argued. He also said that the apprehension of law and order disturbance is not actual, it is only his fear.

He also referred to the decision of the Supreme court in the case of the movie Padmavat and Prakash Jha.

The senior counsel also said that the maker has shown the character the way they perceive. There is nothing wrong with it. It is artistic liberty and freedom of speech and expression guaranteed under the Constitution.

We are not in violation of law in depicting the characters the way we perceive, the senior counsel argued.

There is no personal injury to the plaintiff. His case is simply that the religious sentiments of Hindu communities are hurt by the teaser of the movie. Being a Brahmin, his sentiments are also hurt. He is in fear, the state will take care of the law and order situation, a senior advocate argued.

He also submitted that the law and order situation and other factors must have been considered by the censor board before granting the certificate to the movie. This petition doesn't deserve the time of the court. It is liable to be dismissed.

On the other hand, the petitioner said, "I am not asking for anything for the Hindu community, I am here for myself here as my sentiments are hurt. My religious sentiments from historical times are hurt. This is suit directed towards my feelingsMy senior has admitted that they distorted the epic in the name of artistic liberty, the petitioner submitted.

The plea has alleged that Lord Rama and Hanuman are shown in an unwarranted and inaccurate depiction wearing leather straps. It is also said that Ravana has been shown in the wrong appearance.

It has been alleged that in the trailer of the movie character of Lord Rama, Hanuman and Ravana has been shown in a manner that hurt the religious sentiments of the applicant and many others.

It has been claimed that the defendants have hurt the religious, Cultural, historical, and civilizational sentiments of the plaintiff and many other Hindus by depicting Lord Rama and Hanuman in an unwarranted and inaccurate way in the teaser/promo video of their upcoming movie Adipurush.

Lord Rama is shown as an angry man on a killing spree. Lord Hanuman and Lord Rama are also shown wearing leather accessories in a teaser uploaded on the YouTube page of the producer, the plea said.

The plea also mentioned of the painting of Raja Ravi Verma and the serial Ramayan depicting the characters of Ramayana in a good manner.

As per the Hindu faith lord Rama is portrayed to be calm, magnanimous, figure but the defendant has tried to portray Lord Rama as an angry fighter. The picture of Lord Rama has been portrayed in the Constitution of India where he is shown as calm and composed, the plea stated.

The petitioner has sought a permanent injunction against the trailer/promo of the movie. He also sought a direction to remove the trailer from all social media including YouTube and Facebook. (ANI)