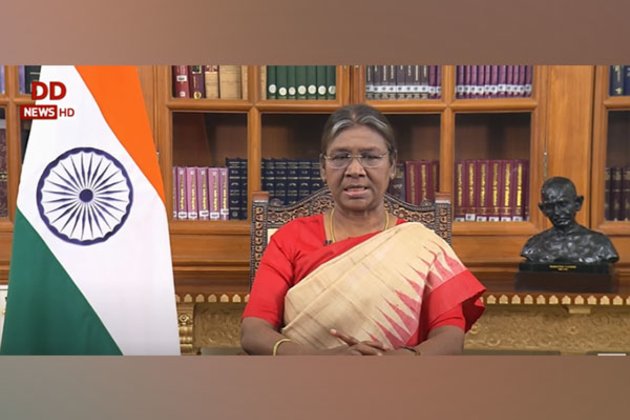 New Delhi [India], January 25 (ANI): President Droupadi Murmu on Wednesday expressed her special appreciation to jawans who "guard the borders and are ready to make any sacrifice for the country" on the eve of 74th Republic Day.

In her address to the nation, the President said, "Generations of people working in different fields deserve praise for their invaluable contribution to the development story of our Republic so far. I commend the roles of farmers, workers, scientists and engineers whose combined strength enables our country to live up to the spirit of "Jai Jawan, Jai Kisan, Jai Vigyan, Jai Anusandhan". I appreciate every citizen who contributes to the nation's progress. I also convey my greetings to our diaspora, the great ambassadors of India's culture and civilisation.""On the occasion of Republic Day, I convey my special appreciation to our jawans who guard our borders and are ready to make any sacrifice for the country. I also express my appreciation for all the brave soldiers of paramilitary forces and police forces who provide internal security to their fellow citizens. I salute all the brave hearts of our armed forces, paramilitary forces and police forces who laid down their lives in the line of duty. I convey my blessings to all the dear children for their bright future," she added.

Speaking about the National Education Policy, the President said that the policy appreciates the role of technology in expanding and deepening the learning process.

The President also emphasized on the role of technology, which offers life-changing possibilities. She said, "The Digital India Mission is striving to make information and communication technology inclusive by bridging the rural-urban divide. More and more people in far-flung places have been reaping the benefits of the internet and are receiving a variety of services provided by the government, as the infrastructure expands. We have reasons to be proud of our achievements in the domain of science and technology."She said that India has been among the handful of pioneers in space technology.

"As long-pending reforms in this sector are underway, private enterprises are now invited to join the quest. The Gaganyaan; program to carry Indian astronauts into space is under progress. This will be India's maiden human space flight. Yet, even as we reach out to the stars, we keep our feet on the ground," she added.

The Nation will celebrate its 74th Republic Day on January 26.

The celebrations include the traditional march past at Kartavya Path comprising a grand parade by the contingents of the Armed Forces and Paramilitary Forces; tableaux display by the States and Central Ministries/Departments; cultural performances by children; acrobatic motorcycle rides and a fly-past, besides Beating the Retreat ceremony at the Vijay Chowk and PM's NCC rally.

This time, Egyptian President Abdel Fattah El-Sisi will be the Chief Guest of the 74th Republic Day celebrations. He will be accompanied by a high-level delegation, including five Ministers and senior officials.

Many new events are being organised as part of the Republic Day celebrations this year. (ANI)