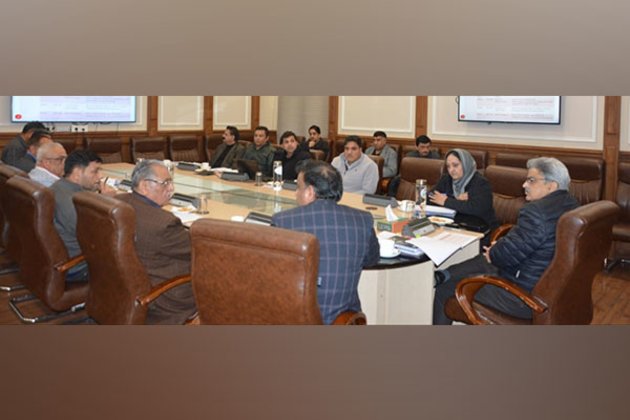 In a Presentation by Director Horticulture (PM), Vikas Sharma, it was revealed that 9 mandis were onboarded in August 2022 in addition to the already onboard mandis of Narwal and Parimpora. He informed that Detailed Project Reports (DPR) have been submitted for adding more mandis.

Additional Chief Secretary (ACS), Atal Dulloo had detailed information regarding the breakup of the number of farmers, traders, commission agents and FPOs registered with the individual mandis.

Pertinently, e-NAM has successfully achieved trade figures of over Rs. 30 crores as well as fostered encouraging outcomes in interstate trade.

ACS enquired about the facilities being provided to the registered members and instructed the officers to ensure that the trade volume of each mandi increases over time.

ACS also had deliberations with the officers regarding the identification of suitable land in coordination with the District Administration for creating new mandis at Kishtwar, Bandipora, Samba and Reasi for the overall development of the agriculture sector.

It was noted that all stores and warehouses could be declared as sub-market yards and that this process would be fast-tracked in the coming month. Also, it was decided that e-auctioning of the un-allotted shop sites in various mandis will be done.

Further, it was revealed that the State Agriculture Marketing Board (SAMB) is going to meet twice a year to take important decisions for the overall development of the Horticulture sector, the functioning of fruit and vegetable markets and for regulation of agriculture marketing in the UT.

It was informed that there are a total of 36 mandis in the state, with 22 currently functional and 14 in various stages of development.

Officials of Horticulture (PlanningMarketing) from Kashmir and a representative from SFAC Delhi were also present virtually. (ANI)